Reasons to Watch Pacquiao Vs Bradley 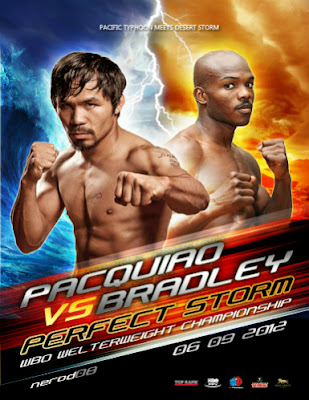 They are Good Guys

Boxing has gained a bad reputation. Casual sports fan like to talk about everything that is wrong with the sport. They will mention bad decisions, corruption and so-called less than entertaining fights. Likewise, boxers such as Dereck Chisora that engaged in a press conference brawl contributes to boxing's bad image.

It is good for boxing to have a prizefight between guys with good character such as Bradley and Pacquiao. They will bring attention to what is important the boxing match. Not pre-fight brawls and silly name calling. They are professionals that are not going to engage in any nonsense.


They are Two of the Best Pound for Pound Boxers in the World
The last few years in boxing their have been several mismatches and overhyped fights. Likewise, it is boring to watch an elite fighter against a boxer that is too inexperienced or past his prime.


Timothy Bradley is a Live Underdog

It has been a long time since Pacquiao fought a young fighter is in his prime. Juan Manuel Marquez gave a good performance in his last fight against Pacquiao. But, Pacquiao's fights against Antonio Margarito, Shane Mosley and Joshua Clottey were not competitive fights.

Bradley is the younger boxer at 28 years old. His hand speed and counterpunching skills could give Pacquiao problems. Besides, Bradley said that he learned from the Marquez-Pacquiao fight to take advantage of Pacquiao's problems dealing with counterpunching. He is also a smart fighter that knows how to make adjustments. So Pacquiao will need to bring his "A" game on June 9th.


They are Fighters Not Boxers
Some fighters turn almost all their boxing matches into brawls. They come right at their opponent. Likewise, Bradley and Pacquiao are aggressive fighters that love to fight.

Pacquiao is one of the most exciting fighters in the world. He is a phenomenal offensive fighter. It is mesmerizing to watch him as he throws combinations that with blistering speed.

" Let me tell you this, this fight I'm sure that it's gonna be a good fight because of Tim Bradley's style, he love to fight toe to toe, he keep coming inside," said Pacquiao. Likewise, Bradley is not going to fight to only survive. He is going to try to win.
Posted by Bloggers Party List at 10:28 PM