“I will send help to those who need it the most and I enjoin all of you to pray for our country and people in these trying times.” 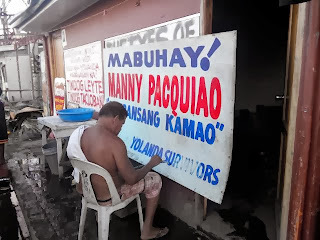 Pacquiao, who defeated Rios by unanimous decision to take the WBO international welterweight title, has dedicated his comeback fight to storm victims and promised to visit Tacloban and outlying regions that the storm had turned into a corpse-strewn wasteland.

When the bell rang to signal the end of the 12-round match, many spectators in Tacloban threw their baseball caps, shirts and pieces of cardboard into the air, even before the result was officially announced.

Tacloban city folk, Nebasa said, would gladly await the visit of Pacquiao, who rose from poverty to become one of the world’s highest-paid athletes.

In Macau, the 13,000-seat arena at the Venetian casino was packed. Many in the audience were Filipinos who either lived and worked in Macau or nearby Hong Kong, or made the one-hour flight from the Philippines.

The much-needed victory of the national boxing hero of the Philippines, Manny Pacquiao was celebrated by the Filipino victims of super typhoon Yolanda which left hundreds of thousands homeless and jobless particularly in the heavily-affected Samar and Leyte provinces.

Filipino boxing icon Manny “Pacman” Pacquiao dedicates his title match against Brandon Rios to the Filipinos who suffered the onslaught of super typhoon Yolanda that hits Visayas on November 8. Pacquiao’s inspiration are the Filipino victims but according to the victims, Manny’s victory lift their spirits and served as inspiration for them.
Posted by Bloggers Party List at 9:30 PM No comments: