'No other option but the use of arms' 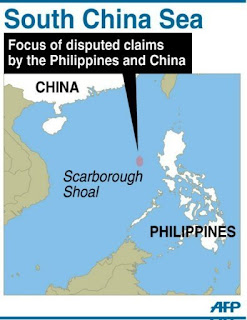 The dispute began when Philippine authorities detected Chinese ships fishing there. They attempted to arrest the crew, but were blocked by Chinese surveillance vessels that were quickly deployed to the area.

The Philippines insists its claims to the area are backed by international law, as the shoal is well within its 200-nautical-mile exclusive economic zone.

The shoal sits about 230 kilometres (140 miles) from the Philippines' main island of Luzon. The nearest major Chinese landmass is 1,200 kilometres northwest of the shoal, according to Filipino navy maps.

But China claims virtually all of the South China Sea as its territory, even waters close to the coasts of the Philippines and other Asian countries.

Taiwan, Brunei, Vietnam and Malaysia also claim parts of the sea, which is believed to sit atop vast oil and gas resources. The rival claims have for decades made the waters one of Asia's potential military flashpoints.
The Philippines, which admits to having an extremely weak military, has repeatedly said it wants to solve the stand-off over the shoal through diplomatic means.

But it has also said it secured a pledge from the United States, its main military ally, to protect the Philippines from attacks in the South China Sea.

A coalition of Filipino activist groups is planning to hold rallies at Chinese embassies around the world on Friday to support the Philippines in the dispute.

Organisers are hoping thousands of people will attend what they expect to be the biggest of the rallies, in Manila, and the Chinese embassy's safety alert was circulated chiefly to warn its nationals about that protest.
But Jackson Gan, a Filipino-Chinese businessman who is one the rally's organisers, said there was no need for such a warning because the protest would not target individuals and there had been no inciting of violence.

"This is going to be peaceful. No burning of Chinese flags, just singing of patriotic songs and making our presence felt," Gan told AFP.

Philippine foreign department spokesman Raul Hernandez also said Chinese nationals were in no danger of being attacked because of the diplomatic tensions.

"The Philippines remains a safe and welcoming country," he told AFP, adding Friday's protesters would not target Chinese people.

"There is nothing for our Chinese friends to be apprehensive about regarding this protest action."
China told its citizens Thursday they were not safe in the Philippines and its state media warned of war, as a month-long row over rival claims in the South China Sea threatened to spill out of control.

Chinese travel agencies announced they had suspended tours to the Philippines, under government orders, and the embassy in Manila advised its nationals already in the country to stay indoors ahead of planned protests.

"Avoid going out at all if possible, and if not, to avoid going out alone. If you come across any demonstrations, leave the area, do not stay to watch," the embassy's advisory said.

The safety alerts came as government-controlled media in China warned the country was prepared to go to war to end the stand-off over Scarborough Shoal -- small islands in the South China Sea that both nations claim as their own.

"No matter how willing we are to discuss the issue, the current Philippine leadership is intent on pressing us into a corner where there is no other option left but the use of arms," the China Daily said in an editorial.
"Manila is living in a fantasy world if it mistakes our forbearance for timidity."

Chinese foreign ministry spokesman Hong Lei said China was committed to a peaceful resolution.
But the editorial echoed other warnings in recent weeks in the state-run media that China was prepared to use its massive military advantage to crush the Philippines' challenge for the shoal.

The two nations have had non-military vessels stationed at the shoal since April 8 in an effort to assert their sovereignty to the area. 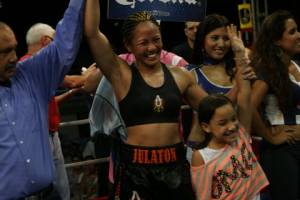 Ana "The Hurricane" Julaton showed why she is one of the most dominating female fighters in the world today. Not only did she plead to fight a Power Punching Mexican Fighter in Segura who came in 4lbs over the contract limit during weigh ins at 130lbs (Contract weight was 126lbs) which is a higher weight class for Julaton who normally fights at 122lbs, but she dominated Segura by using angles, footwork and her Signature Jab. Segura who was visibly the bigger fighter could not establish her power punching rhythm during the fight as Julaton put on a pure display of boxing excellence in the ring tonight. "Ana boxed beautifully tonight, this is the style that suits her best and I was so very proud of her performance tonight!! She pitched a "NO HITTER" and I am confident Ana will win her fourth World Title this year" said Allan Tremblay of Orion Sports management who has guided Julaton's career.

"I am happy to have the full support of Orion Sports Management and I am very happy that Allan continues to trust me with these opportunities" Julaton said about her Promoter. Julaton who is now 11Wins 3Losses 1 Draw was cheered on by the hometown crowd of Yucatan as this was her second fight in their homeland and she is showing why she is a fan favorite World Wide. Some locals yelled "Ms Pac Man Please Knock her out" and other cheers were directed towards the Female fighting pride of the Philippines. Many yucatan people have been calling Julaton "Huracan de Yucatan" as she had been given a Jersey by the Yucatan Leones Baseball team President with the an inscription in the back "Huracan de Yucatan" the night before the fight as Ana threw the first pitch of the game.

Canal Trece's Juan Carlos Guitierez interviewed Ana in the fight in which Julaton thanked all the support from the people all over the world and thanked the GMA Network and Yucatan Boxing. The question was asked what is next for her and Julaton's response was "I would like to fight Jackie Nava next and since she doesn't like to leave her hometown to fight I have no problem fighting Nava right her in Mexico!"

Allan Tremblay who was interviewed by the GMA Network who was in Mexico covering the fight said "I would like Ana to fight Jackie Nava in her home province of Pangasinan as I believe it would be one of the great events this year. I have been attempting to contact Governor Amado Espino Jr. through his staff and I hope to hear a response from him soon before I make my decision for Ana's next fight. There are many locations interested in that fight but I would for us to give Ana's next World Title fight to the good people of the Philippines. It's time for her to have a Homecoming Event."

Pangasinan Governor Amado T. Espino Jr. hosted Ana Julaton's Homecoming Celebration in 2010 after Julaton won the WBO 122lbs Championship defeating current WBC Silver Belt Champion Mexico's Maria elena Villalobos. A fight in the Philippines would be a mega attraction with Julaton challenging for her 4th World Championship. Rumor's are that Jackie Nava will be fighting on July 14th in Texas on the undercard of Juan Manuel Marquez. A Julaton vs Nava fight would be one of the biggest events in Mexico and the Philippines but could be a great addition to that fight card in Texas.

Orion Sports Management will announce Julaton's next fight venue within the next few weeks. Philippines, Mexico, Argentina or Texas where ever it may be the Hurricane is back into her "Pugilist Specialist" ways.
Posted by Bloggers Party List at 9:33 PM No comments: 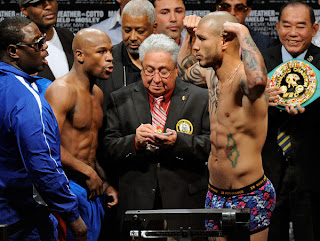 When the smoke cleared, the main-eventers easily made weight but one of the boxers involved in the supporting main event came in a tad over the limit.

Miguel Cotto (37-2-0,30 KO) of Caguas, Puerto Rico made the super welterweight limit of 154 pounds without any problem at all.

Floyd Mayweather (42-0-0,26 KO) of Grand Rapids, Michigan surprisingly came in 3 pounds under the contract limit. He was a sizzling 151 pounder.

Moments ago inside of the MGM Grand Garden Arena in Las Vegas, Nevada, the weigh-in took place for this weekend’s ‘Ring Kings’ pay-per-view blockbuster.

In the evening’s main event, Miguel Cotto defends his WBA junior middleweight crown against Floyd Mayweather Jr. Cotto came in exactly at the limit of 154 pounds while Mayweather, who is moving up for this fight, came in at 151 pounds.

In the evening’s co-feature, Saul Alvarez came in at 154 pounds in advance of his WBC junior middleweight title defense against Shane Mosley, who was a half a pound over at 154.5 pounds. Mosley would later come back to make the weight and the bout is a go for tomorrow night.

It maybe noted that this is the heaviest that Mayweather ever was in any weigh-in he has had in his past fights.

In the supporting main event, a fight that is for the WBC Super welterweight crown, world champion Canelo Alvarez (39-0-1, 29KO) of Guadalajara, Mexico hit the scales at exactly 154 lbs.

His challenger, former world champion Sugar Shane Mosley (46-7-1, 39 KO) of Pomona, California however was half a pound over the contract limit of 154 lbs.

Mosley was given two hours to shed the excess baggage and without doubt, he will make it the second time around as half a pound is really nothing to lose for professional boxers like him.

Will the weight be an issue tomorrow? Let us just wait and see.

Most of the talk in the media room centered around Mosley. The veteran according to a reliable source is being paid $650,000 for the fight, indeed a neat sum that will go towards his retirement. Champion Alvarez is on the other hand getting a whooping $1.2 million.
Posted by Bloggers Party List at 10:52 PM No comments: