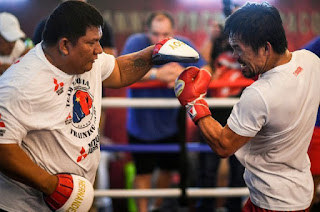 Pacquiao is going for his 60th victory since turning pro in 1995, but despite winning 38 of his first 47 fights by knockout, he has not stopped an opponent in nine years.

"He looks like the old Pacquiao," declared Fortune of the boxer who is also an elected senator in the Philippines and is tipped one day to run for president. "His metabolism is ridiculous. He's a freak."

Matthysse (39-4, 36 KOs) paid tribute to Pacquiao but warned that his admiration for one of the world's greatest pound-for-pound fighters would not stop him from taking his belt back to South America.

Filipino legend Manny Pacquiao challenges Lucas "The Machine" Matthysse for the World Boxing Association welterweight belt on Sunday knowing defeat could lower the curtain on one of the greatest careers in boxing history.

Pacquiao is a slight betting favorite at -210, meaning you’d have to bet $210 on him to win $100, while Matthysse is +170. But this ESPN+ fight feels like a 50-50 matchup (though it seems like most fighters who are weighing in on the fight are going with Pacquiao). That said, here are some predictions from those fighters and experts who know these boxers better than most anybody else.

Henson said that boxing promoters could make a killing even if they get only a slice of the Chinese pay-per-view (PPV) market. "If each pay-per-view subscription sells for $10, with a conservative audience of 100 million, total revenues would amount to $1 billion," he said, higher even than the $400 million PPV gross in the Pacquiao vs Floyd Mayweather bout.

Prior to his title bout on Sunday, Pacquiao's MP Promotions had welcomed to its training camp in General Santos City nine Chinese fighters.

China’s most famous boxer, Zou Shiming, lost his WBO flyweight belt when he was knocked out by Japan’s unfancied Sho Kimura in his first defense last year.

When Pacquiao’s plans for China were first announced in 2014, he said that he believed the partnership could help thaw frosty ties between the Philippines and China, who were engaged in a maritime dispute in the South China Sea.

Relations have since improved considerably under current Philippine President Rodrigo Duterte
Posted by Bloggers Party List at 2:12 AM No comments: