We can do much more for the Philippines 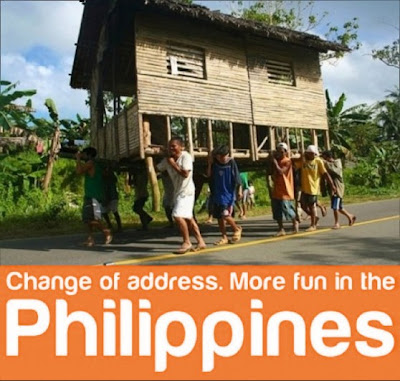 To all Filipinos Everywhere:

I used to think that corruption and criminality in the Philippines were caused by poverty. But recent events tell me this isn’t true. It is one thing to see people turn into drug addicts, prostitutes, thieves and murderers because of hunger and poverty, but what excuse do these rich, educated people have that could possibly explain their bizarre behavior? And to think I was always so relieved when petty snatchers got caught and locked away in jail because I never fully realized that the big time thieves were out there, making the laws and running our country. Can it get any worse than this?

Every night, I come home and am compelled to turn on my tv to watch the latest turn of events. I am mesmerized by these characters. They are not men. They are caricatures of men - too unreal to be believable and too bad to be real. To see these “honorable” crooks lambast each other, call each one names, look each other in the eye and accuse the other of committing the very same crimes that they themselves are guilty of, is so comical and apalling that I don’t know whether to laugh or cry. It is entertainment at its worst!

I have never seen so many criminals roaming around unfettered and looking smug until now. These criminals wear suits and barongs, strut around with the confidence of the rich and famous, inspire fear and awe from the very citizens who voted them to power, bear titles like “Honorable”, “Senator”, “Justice”, “General” and worse, “President”. Ironically, these lawless individuals practice law, make our laws, enforce the law. And we wonder why our policemen act the way they do! These are their leaders, and the leaders of this nation – Robin Hoodlum and his band of moneymen. Their motto? “Rob the poor, moderate the greed of the rich.”

I am an ordinary citizen and taxpayer. I am blessed to have a job that pays for my needs and those of my family’s, even though 30% of my earnings go to the nation’s coffers. Just like others in my lot, I have complained time and again because our government could not provide enough of the basic services that I expect and deserve. Rutty roads, poor educational system, poor social services, poor health services, poor everything. But I have always thought that was what all third world countries were all about, and my complaints never amounted to anything more.

And then this. Scandalous government deals. Plundering presidents pointing fingers. Senators associated with crooks. Congressmen who accept bribes. Big time lawyers on the side of injustice. De Venecia ratting on his boss only after his interminable term has ended, Enrile inquiring about someone’s morality! The already filthy rich Abalos and Arroyo wanting more money than they or their great grandchildren could ever spend in a lifetime. Joker making a joke of his own “pag bad ka, lagot ka!” slogan.. Defensor rendered defenseless. Gen. Razon involved in kidnapping. Security men providing anything but a sense of security. And it’s all about money, money, money that the average Juan de la Cruz could not even imagine in his dreams. Is it any wonder why our few remaining decent and hardworking citizens are leaving to go work in other countries?

And worst of all, we are once again saddled with a power-hungry president whose addiction has her clinging on to it like barnacle on a rusty ship. “Love (of power) is blind” takes a whole new meaning when PGMA time and again turns a blind eye on her husband’s financial deals. And still blinded with all that is happening, she opts to traipse around the world with her cohorts in tow while her country is in shambles.

They say the few stupid ones like me who remain in the Philippines are no longer capable of showing disgust. I don’t agree. Many like me feel anger at the brazenness of men we call our leaders, embarrassment to share the same nationality with them, frustration for our nation and helplessness at my own ineffectuality. It is not that I won’t make a stand. It is just that I am afraid my actions would only be futile. After all, these monsters are capable of anything. They can hurt me and my family. They already have, though I may not yet feel it.

But I am writing this because I need to do something concrete. I need to let others know that ordinary citizens like me do not remain lukewarm to issues that would later affect me and my children. I want to make it known that there are also Filipinos who dream of something better for the Philippines . I want them to know that my country is not filled with scalawags and crooks in every corner, and that there are citizens left who believe in decency, fairness, a right to speak, a right to voice out ideas, a right to tell the people we have trusted to lead us that they have abused their power and that it is time for them to step down. I refuse to let this country go to hell because it is the only country I call mine and it is my responsibility to make sure I have done what I could for it.

Those of us who do not have the wealth, power or position it needs to battle the evil crime lords in the government can summon the power of good. We can pray. We can do this with our families every night. We can offer petitions every time we celebrate mass. We can ask others to pray, too, including relatives and friends here and overseas. And we can offer sacrifices along with our petitions, just so we get the message to Him of our desperation in ridding our nation of these vermin. After all, they cannot be more powerful than God!

I implore mothers out there to raise your children the best way you can. Do not smother, pamper, or lavish them with too much of the material comforts of life even if you can well afford them. Teach them that there are more important things in this world. I beg all fathers to spend time with their children, to teach them the virtues of hard work, honesty, fair play, sharing, dignity and compassion – right from the sandbox till they are old enough to go on their own. Not just in your homes, but at work, in school, everywhere you go. Be good role models. Be shining examples for your children so they will learn to be responsible adults who will carry and pass on your family name with pride and honor.

I call on educators and teachers – we always underestimate the power of your influence on the minds of our youth. Encourage them to be aware of what is happening in their surroundings. Instill in them a love of their country, inculcate in them the value of perseverance in order to gain real, worthwhile knowledge, help us mold our children into honorable men and women. Encourage our graduates, our best and brightest, to do what they can to lift this country from the mire our traditional politicians have sunk us into. The youth is our future – and it would be largely because of you, our educators, that we will be able to repopulate the seats of power with good leaders, presidents, senators, congressmen, justices, lawmakers, law enforcers and lawful citizens.

I ask all students, young people and young professionals everywhere to look around and get involved in what is happening. Do not let your youth be an excuse for failure to concern yourselves with the harsh realities you see. But neither let this make you cynical, because we need your idealism and fresh perspective just as you need the wisdom of your elders. YOUR COUNTRY NEEDS YOU! Let your voices be heard. Do what you can for this land that gave you your ancestors and your heritage. Use technology and all available resources at hand to spread good. Text meaningful messages to awaken social conscience. Try your best to fight moral decay because I promise you will not regret it when you become parents yourselves. You will look back at your past misdeeds and pray that your children will do better than you did.

Remember that there are a few handful who are capable of running this country.. You can join their ranks and make their numbers greater. We are tired of the old trapos. We need brave idealistic leaders who will think of the greater good before anything else. Do your utmost to excel in your chosen field.. Be good lawyers, civil servants, accountants, computer techs, engineers, doctors, military men so that when you are called to serve in government, you will have credibility and a record that can speak for itself.

For love of this country, for the future of our children, for the many who have sacrificed and died to uphold our rights and ideals, I urge you to do what you can. As ordinary citizens, we can do much more for the Philippines than sit around and let crooks lead us to perdition. We owe ourselves this.. And we owe our country even more.
Posted by Bloggers Party List at 7:10 PM

Email ThisBlogThis!Share to TwitterShare to FacebookShare to Pinterest
Labels: philippines, We can do much more for the Philippines