Who's PPV King, Pacman or Floyd? 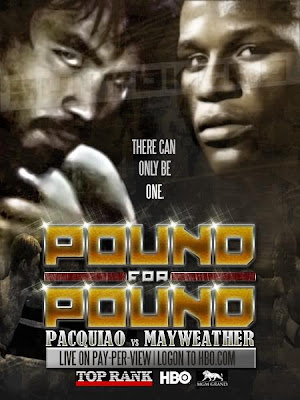 The superfight is far from happening, and in fact it may never happen at all. But in the next couple of months they will be pitted against each other once more.

It will be a big battle over pay-per-view numbers when Mayweather takes on Miguel Cotto on May 5, and Pacquiao collides with Tim Bradley on June 9.

Two great fights in a span of five weeks, and again a lot of people will be waiting for the numbers to come in once they’re through with their fights.

It will be the question of who the sport’s biggest draw is. Mayweather claims he’s the greatest of them all, and Pacquiao said he couldn’t care less.

“I even don’t think of myself as a great boxer. I let the people say how good I am as a fighter,” said Pacquiao.

Mayweather said he will be Mayweather even if he doesn’t fight the Filipino superstar. Pacquiao said he’s the same without mentioning the name of the undefeated American.

Over recent years, Pacquiao has made pay-per-view his bread and butter, with close to eight million buys combined in his last seven fights.

“That takes him to the super elite status and in the annals of pay-per-view history,” said the HBO senior vice president Mark Taffet of Pacquiao.

Mayweather still shares the pay-per-view record of 2.4 million buys in his fight against Dela Hoya in 2007 but since he came out of retirement hasn’t gone over 1.25 (against Victor Ortiz).

Insiders say Mayweather vs Cotto is easier to sell than Pacquiao vs Bradley, just one of the great fighters but whose name doesn’t really ring a bell outside the United States.

Pacquiao is done with Cotto, with boxing’s only eight-division champion stopping the heavy-handed Puerto Rican inside 12 rounds.

Many thought it was the end of the line for Cotto until he bounced back with a string of victories, including a big one against Antonio Margarito last December.

It earned Cotto the right to fight Mayweather who needed Cotto as his next opponent more than Pacquiao needed Cotto for a rematch.

Mayweather will do everything to go over a million pay-per-view buys against Cotto, and hope that Pacquiao fails to draw the number against Bradley.

If that happens, then Mayweather can keep his head up, and say he’s the biggest star out there, again just enough for him to demand a bigger share of the purse for a possible fight with Pacquiao.

If Mayweather beats Cotto, he also becomes the junior-middleweight champion, and he’d surely ask Pacquiao to climb the ladder and challenge him at 154 lb.
Posted by Bloggers Party List at 4:16 PM