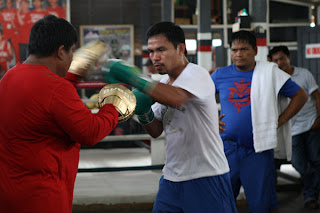 His pretty face was battered and bruised as Pacquiao, with blinding hand-speed and remarkable movement cut De La Hoya to ribbons, nailing him with punches from all angles and darting in and out with such dexterity that De La Hoya couldn't catch him, laying to waste his boast that he would knock Pacquiao out because the battle was "personal."

While Pacquiao's speed didn't take the life of De La Hoya, the Filipino southpaw pulverized one of the biggest names and certainly one of the most glamorous fighters in the history of the sport, forcing him to quit seated on his stool at the end of the 7th round.

It obviously had to do with Pacquiao accepting $250,000 following a dinner with De La Hoya in Los Angeles and then signing a promotional contract without realizing that under the terms of an existing contract with Top Rank's Bob Arum, he couldn't break away.

That contract, for the record, was recently extended to December 2014 with reports that Pacquiao got a $1 million signing bonus.

The 2014 deadline provides an insight into Pacquiao's career path. By then Pacquiao would be 35 years old and would wish to concentrate on his political career. It also leaves enough time for him to entice undefeated Floyd Mayweather Jr to step into the ring against him in a fight the world has clamored for but is unlikely to do so, for much longer.

Pacquiao has bent backwards to accommodate Mayweather's demands including taking a smaller purse and agreeing to random drugs tests. As one boxing columnist pointed out, the only thing Pacquiao didn't offer to do was to drive Mayweather to the venue of their fight.

With the possibility of a rematch or even a trilogy provided they are able to agree on the first fight, then the 2014 contract extension fits nicely into Pacquiao's plans.

Right now however, his plans are centered on shutting up Mexican legend Juan Manuel Marquez who has continued to irritatingly claim that he won their three previous fights and was robbed of the decision by the judges.

If at all, Marquez could make a case for a truly controversial split decision victory by Pacquiao in their third encounter but there is no way he won the first after being dropped three times in the opening round which ended in a draw after judge Burt Clements admitted he made a mistake scoring the first round 10-7 instead of 10-6 which the two other judges did based on the three knockdowns.

In their rematch Pacquiao dropped Marquez once again with a perfectly-timed left hook to win a majority decision.

But after the controversial third fight and Marquez's posturing, celebrated trainer Freddie Roach wants nothing less than a knockout to erase the doubts over their previous battles and to effectively prove who is the better fighter.

Roach has made it clear "It has to be a knockout" which is what they have worked on in the gym, hammering out a strategy that would accomplish the goal.

Legendary Mexican Julio Cesar Chavez, Sr.  told Pacquiao's strength and conditioning coach Alex Ariza that reflecting over Pacquiao's recent fights "the problem with Manny is he thinks too much and when he does some thing he gives Marquez time. But when Manny loosens up and lets it go, Marquez looks lost. He didn't know what to do at times. That's Manny Pacquiao."

Chavez added: "You don't know what he's doing when he throws so many punches. You don't have time to figure and set up counter punches because it's 'boom, boom, boom and its coming from. everywhere."

Chavez, Sr. believes Pacquao must let his hands go, and go after Marquez because when he does there is nobody who can deal with that. In short, Manny must return to being a street-fighter ready to rip Marquez' head off.

From all accounts after two weeks preparation at the Wild Card Gym following two weeks of solid training in his hometown of General Santos City with childhood friend and Filipino trainer Restituto "Buboy" Fernandez which even drew a surprised look on Roach's face to see Pacquiao in such good shape and commendation from Ariza, Pacquiao appears to be returning to the fiery fighter he once was — the same devastating puncher who mauled De La Hoya, separated Ricky "The Hitman" Hatton from his senses in two rounds and ripped Miguel Cotto to score a 12th round TKO.

As Pacquiao himself has said the challenge is to put on a performance that will "put this fight into history."

In the assessment of Ariza, who normally likes to back off from making the mistake of painting a glowing picture of where Pacquiao is at and how well he's doing, the old fire is back in the belly of Pacquiao.

Six sparring sessions have demonstrated the sharp focus and the relentless pursuit of a goal by Pacquiao which was set for him by Roach. Nothing short of a knockout would suffice when he clashes with Marquez for the fourth time at the MGM Grand Garden Arena on December 9 (Manila Time).

To him it's clear that Manny wants to be the old Manny Pacquiao who, when he hurt an opponent he would pursue him and when he threw punches it was with the intention of hurting the man in front of him.

The resiliency is there and he's relentless throwing flurries of punches and putting them together effectively.

To the strength and conditioning coach who began his association with Roach and took over Pacquiao's conditioning from former heavyweight contender Justin Fortune, "It's a different Manny Pacquiao, just like the old times."

The normally conservative Ariza didn't back off when asked what he thought of Pacquiao with four weeks to go before fight night He conceded that "on a scale of 1 to 10, I'd give him a 10!"

But he quickly threw in a conditionality stating that he hated making such assessments "because I don't want to set myself up since I don't know what's going to happen over the next two weeks."

If all goes as planned then Freddie Roach may well  get his wish as well as Pacquiao's mother, Dionisia Pacquiao, who has made it clear she wants her son to finish Marquez "in one or two rounds."