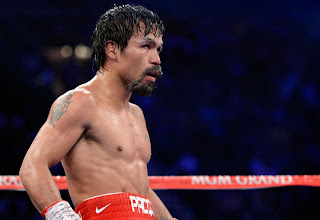 The question in the minds of most of the fans of "Fighter of the Decade" Manny Pacquiao is what' s taking him so long to decide on the opponent for his planned December 8 fight at the MGM Grand Garden Arena.
Initially, there was some confusion on when the fight would take place, if at all.
Timothy "Desert Storm" Bradley's gimmick in holding up a large replica of a fight ticket for November 10 which Bradley picked as the  date of a rematch has apparently backfired on him.
In fact, Top Rank promoter Bob Arum told us the US pay-per-view networks are not interested in a Pacquiao-Bradley rematch since their first meeting produced a mere 700,000 PPV buys which were basically regarded as people who wanted to watch Pacquiao, not Bradley.
The hugely controversial split decision in which Bradley grabbed the WBO welterweight title of Pacquiao didn't sit well with many who condemned the decision as a robbery perpetrated, in the words of Arum, by three blind mice.
The other aspect of the Bradley equation is that he, as champion in the books, would ask for more than the $5 million he got the first time around and Arum isn't prepared to fork out any extra dollars unless it comes out of Pacquiao's purse. And for all Manny's charitable disposition he is unlikely to take a cut in his purse merely to have an opportunity to avenge his defeat which, in the eyes of the whole wide world, was no defeat at all.
Pacquiao, according to Arum who actually deals with him through Michael Koncz, Pacquiao's adviser who is also a good friend of Arum, will "definitely fight on December 8."
The venue will be the MGM Grand Garden Arena. But, as of this moment, Pacquiao hasn't decided on an opponent although his options, based on the proposals laid out by Arum, have been narrowed down to Bradley and Mexican legend Juan Manuel Marquez after Pacquiao's initial choice Miguel Cotto dropped out, refusing to come down to 150 pounds and preferring to face champion Austin Trout.
Perhaps the delay in Pacquiao's decision stems from the fact that if chances of a massive money-earning showdown with undefeated Floyd Mayweather Jr look much better  today after  Mayweather's close friend 50 Cent got into the boxing promotion business, Manny may not wish to gamble on a troublesome opponent like Marquez whose three fights with Pacquiao have all been close with the last one truly controversial.
Of course Marquez keeps blabbering that he won all three fights but that the judges robbed him of victory.
Whether this is a ploy to entice Pacquiao to agree to a fourth fight in a desire to shut him up we'll never know.
But one thing for sure, the influential president of the World Boxing Council Don Jose Sulaiman doesn't want Pacquiao to give Marquez a chance to make a lot more money fighting him after having effectively insulted Pacquiao by his claims and apparently bad-mouthing the eight division champion in Mexico.
Don Jose is one of those who staunchly believes a Pacquiao-Mayweather fight can be made and has offered to lend his good offices to help achieve the goal of staging a fight the whole world wants to see before both fighters begin to fade and the long wait erodes public interest.
Arum himself believes that 50 Cent has shown a good business sense and would be far easier to deal with compared to his arch rivals — or is it enemy — Golden Boy Promotions who Arum claims,  carry a lot of baggage when they enter into negotiations.
Getting back to the December 8 date, Arum told us the other day he has an idea as to who Pacquiao is leaning towards and said he expects a decision to be made within the week which is the same tune that Michael Koncz is singing.
Mexican promoter Fernando Beltran who is also close to Arum says a Marquez fight is 95 percent done while Koncz says a few things need to be resolved.
Both celebrated trainer Freddie Roach and strength and conditioning guru Alex Ariza have openly stated that a fourth fight with Marquez would  be testy. And they are laying down specific suggestions which, hopefully, Manny will respond to, positively.
The common ground is that Pacquiao should train for eight weeks solely at the Wild Card Gym in Los Angeles and scrap the Baguio City training camp where they realize there are far too many distractions, including nightly Bible Study and preaching sessions where a gathering of pastors seem to have replaced the previous group of hangers-on.
While the excesses of the past have happily disappeared, Pacquiao is still forced into long hours and late nights with his new-found evangelical mission telling on him, physically.
Several individuals close to Pacquiao tell us that whenever they bring up the question of who his next opponent will be, Manny shrugs them off with vague and inconclusive answers making them wonder whether indeed he is going to fight on December 8 or linger awhile hoping that a Mayweather fight could be made before next May's congressional elections.
Pacquiao is running for re-election from the lone district of Sarangani province and while he is unlikely to face any credible challenge, a political war chest replenished by a possible $50 million bonanza from a Mayweather fight would certainly make things so much easier.
In the meantime, we are all required to wait, wondering what's taking Manny so long to decide.
Posted by Bloggers Party List at 1:13 AM No comments: