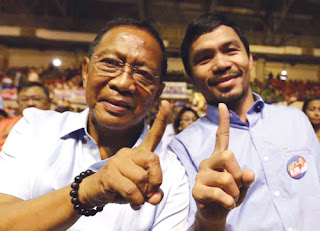 Saranggani Rep. Manny Pacquiao assured Vice President Jejomar Binay of his unwavering support to his presidential bid despite the entry of his good friend Davao City Mayor Rodrigo Duterte in the presidential race.

Pacquiao  made the pledge as he welcomed United Nationalist Alliance standard bearer in his province and accompanied  the vice president in going to Colon, Maasim town where Binay was scheduled to grace the Fourth Council Jamboree of the Boy Scouts of the Philippines.

Duterte filed his certificate of candidacy for president as a substitute to former Quezon City barangay chairman Martin Dino as candidate of PDP-Laban party.,

Pacquiao is running as senator for UNA.  He used to be national vice president of PDP-Laban.
Before filing his certificate of candidacy for senator, Pacquiao admitted that he was asked to back Duterte, whom he considers as a good friend.

Pacquiao said his support for Binay should not be misconstrued to spell the end of his friendship with Duterte.

The  eight division world champion said he will strongly campaign for Binay.