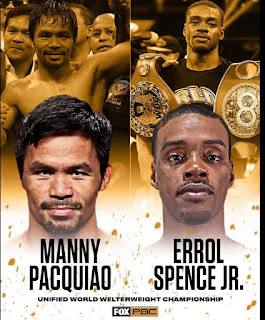 On May 21, 2021, eight-division world champion Manny Pacquiao made the unexpected announcement on his social media that he would face undefeated WBC and IBF welterweight champion Errol Spence Jr. on August 21 in Las Vegas on Fox pay-per-view (PPV).

This 12-round welterweight title bout will take place on Saturday, August 21 and is being held at the T-Mobile Arena in Las Vegas.

The ring walks for Pacquiao v Spence are expected from 5am on Sunday morning UK time.

No TV coverage has been confirmed for the UK as of yet but the fight will be shown on FOX PPV in the USA.

Errol Spence Jr is set to defend his WBC and IBF welterweight titles against Manny Pacquiao in a big FOX pay-per-view main event on Aug. 21, and stopped by tonight’s Showtime broadcast in San Antonio to speak with Brian Custer about the fight — and about Terence Crawford.

Spence (27-0, 21 KO) chuckled a bit when he was reminded that the 42-year-old Pacquiao (62-7-2, 39 KO) said that if he can beat Errol Spence Jr next month, he should be considered the best fighter ever. And the Texan believes that on the other hand, if he beats Pacquiao, it will prove that he is truly the top welterweight today.

The two men had previously already met more than two years prior on March 16, 2019, in the ring following Spence's unanimous decision victory over Mikey Garcia in Arlington, Texas, when both Pacquiao and Spence indicated they would relish the chance to fight each other.

Errol Spence Jr. won't press for a knockout against Manny Pacquiao. All the unbeaten American champion wants now is a clear victory over the legendary Filipino icon.

Aside from the visible differences in their first face-off, bettors were also swayed to Spence's side by the fact that Pacquiao last fought in July 2019 when he bested the then-unbeaten Keith Thurman for the World Boxing Association super welterweight belt.

Despite the odds stacked against him, Pacquiao chose Spence, holder of the World Boxing Council and International Boxing Federation crowns, in what could be his final fight.

While this fight is certainly one that has got fans excited, there is a hint of disappointment with many wanting Spence to face WBO champion Terence Crawford in what would be a clash for the ages.